Thousands of Tibetans were out protesting across Tibet, waving Tibetan flags, shouting pro-independence slogans and calling for the “Return the Dalai Lama to Tibet”.  In Bora Township over a thousand Tibetans protested including nomads and farmers who galloped into town on their horses and others rode motorbikes during the protest. Protesters replaced the Chinese flag with the Tibetan National Flag at the township’s Primary and Middle Schools.

Audio:
“What we’ve seen is a huge influx of paramilitary police” 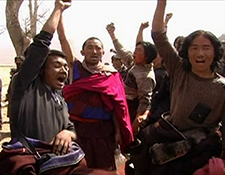