Hundreds of monks and nuns continued to protest. Monks from Ganden Monastery staged a sit-in protest, which was met with security personnel who fired tear gas to try to disperse the protesters. At Sera Monastery at least 600 monks marched from the monastery in protest against China’s rule, while hundreds more staged a non-violent demonstration in the monastery; Chinese police used force to stop protesters; an eye-witness reported that the police were “kicking and beating” the monks. Read the eye-witness report at BBC – Eyewitness: Monk ‘kicked to floor’ 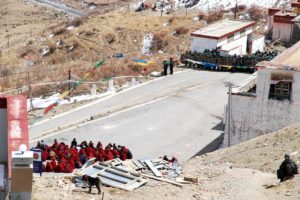